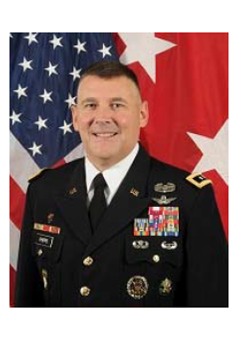 In Memory of Warren E. Phipps, JR. It is with great sadness that we announce the loss of Retired Major General Warren E. Phipps, Jr. born on June 18, 1960 who passed away suddenly on October, 25, 2021. General Phipps earned several awards through his support of Operation Iraqi Freedom, Operation Enduring Freedom and advisement to senior leaders. A Distinguished Service Medal with one Bronze Oak Leaf Cluster and Bronze Star Medal with a Bronze Oak Leaf Cluster rank high among the many accolades from superiors, peers and subordinates.

Warren dedicated his life to service. After 35 years in the U.S. Army he spent his retirement with several organizations who witnessed Warren's leadership by example, his generosity and strong moral compass in his work and private life. These include Metro Ministry, Salvation Army Christus Spohn Health System, the City of Corpus Christi, the Gulf Coast Humane Society, Catholic Charities USA, Catholic Charities Archdiocese of Galveston-Houston, and the American Red Cross. Just one instance of his selflessness was in August 2017. He served as the Executive Director of the Coastal Bend Recovery Group when Hurricane Harvey devastated the Coastal Bend communities. Warren immediately responded to the needs of many families affected by the storm. He assisted those in need with food and material distribution by volunteering through the Food Bank of the Coastal Bend. He lent his strategic planning expertise to long-term disaster recovery efforts. General Phipps was able to build what he liked to call, "a coalition of the willing", to repair and rebuild homes that were destroyed by Hurricanes Harvey and Hanna for families that lacked the resources to recover on their own. His leadership in this collaborative effort enabled 621 families to return to their reconstructed homes while assisting many others with additional unmet needs. In March 2020, he took the position of Executive Director of Catholic Charities of Corpus Christi, Inc. and Mother Teresa Shelter, Inc. with a heart to help the homeless.

Warren is survived by his wife Sylvia Phipps, their sons Brian Phipps, Kevin Phipps and daughter in law, Katherine Phipps. He also leaves behind three grandchildren: Ruby, Beau and Koral. Community, family, and friends are invited to join the family remember Warren at a rosary service with viewing Friday, November 5,2021 at 6pm at the Corpus Christi Cathedral. A local service is on Saturday, November 6, 2021 with a second viewing at 11:00 am prior to the High Noon Mass at the Corpus Christi Cathedral.

To order memorial trees or send flowers to the family in memory of Warren Phipps JR., please visit our flower store.
Send a Sympathy Card