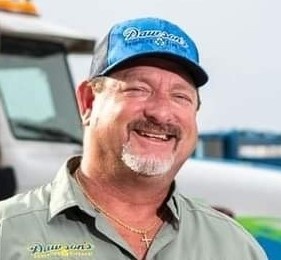 Vance has resided in Gregory Portland his whole life. As most of y’all may know, most the Vance’s did and still do. Vance is the founder and owner of Dawson’s Recycling and Disposal out of Gregory, Texas which opened back in 1997. He was big on giving back to his community, especially when it came to taking care of first responders. Vance was one to walk into a restaurant, knowing that officers/firefighters/paramedics, you name it, were eating their meals just to walk out with their full bill, not mentioning to anyone that he had picked it up. It was not for the recognition with him. It was because he truly cared about his people. Vance was a member of all the local First Responders Foundations.

Most will say they know Vance by his handshake. If you were to of shaken this man’s hand, trust me, you would not forget it either. Not only was his hand as big as a grown man’s face, but he had a sense of respect for anyone who came up to him for a simple handshake which almost always led to a life talk or conversation about business. You could talk to Vance for only 5 minutes but felt like you knew him your whole life.

You could always catch Vance on a gambling trip with his wife Nina and friends or family. If they were not gambling, there were on vacation. He always made sure to enjoy life. His motto was “Work Hard, Play Harder.”

Vance was a man of his word and loved nothing more than his family. Every thing this man did in life was for his family and to make sure that they were and are always taken care of. He was his happiest when all his kids and grandkids were over spending time outside with all the animals.

To order memorial trees or send flowers to the family in memory of Vance Dawson IV, please visit our flower store.
Send a Sympathy Card