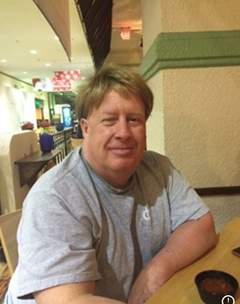 Tiner, Terry Wayne 1959 -2017 Died peacefully after a short battle with cancer at the age of 57, on September 3, with his family at his side.  Terry was born in Abilene, TX and attended Liberty University.  Through the years, Terry served his community in numerous ways; as a houseparent at Hendrick Home for Children where he played a much needed role as a father figure to many children, as a shift supervisor at Abilene Hope Haven, a crisis counselor at Betty Hardwick ECI, and retired from his role as Program Manager at Abilene State Supported Living Center before moving to Portland, TX.  Terry is well known for his love of politics, bodybuilding, and football.  He was a loyal alumni for the Wylie Bulldogs and a devoted fan of the Dallas Cowboys.  Terry will always be remembered as a quiet presence in any crowded setting but was a vocal and articulate conversationalist through his writing.  He will be sorely missed by his wife Randa, sons Kyle (Sarah), Nathan, and Randy, his mother Janice, sister Cynthia Lamberson (Mark), grandchildren Grace and Bentley, nieces Jessica Vasquez and Cheri Hendry, and numerous aunts, uncles, and cousins.  He was predeceased by his dear daughter Kelly and his father Wayne.

To order memorial trees or send flowers to the family in memory of Terry Wayne Tiner, please visit our flower store.