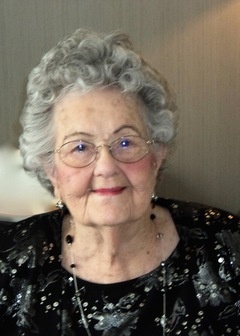 After graduating from Incarnate Word Academy in Corpus Christi, Rosalie married the man and love of her life, Alton Jones on June 6, 1938. Before his passing, Rosalie and Alton were married for 75 Years. She is preceded in death by her husband, Alton, and son David. She is survived by her children Anne Baldwin and Bill and Tom Jones (spouses Mark, Joanne and Donna) and by her 13 grandchildren: Tommy, Nicholas, Jennifer, Shelly, Shanly, Brian, Ryan, Lisa, Stacy, Reid, Ashley, Shannon and Lindsey and 26 great grandchildren.

Family and friends are invited to celebrate Rosalie's life at a viewing and Rosary at Limbaugh Funeral Home in Portland, Texas on Monday, August 14th. The viewing will be between 5 PM and 7 PM and the Rosary will begin at 7 PM. A funeral mass will be on Tuesday, August 15 at Our Lady of Mount Carmel Catholic Church in Portland beginning at 10 AM followed by a luncheon in the parish hall. Burial will be at the Roselawn Cemetery in Alice, Texas.

To order memorial trees or send flowers to the family in memory of Rosalie Anne Jones, please visit our flower store.