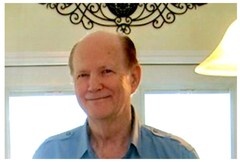 Bruce Matthews, 75, of Portland passed away peacefully on March 4. He was preceded in death by his parents Richard and Marie Matthews both of Corpus Christi.

He is also survived by 6 granddaughters who all called him Captain Cool!

He graduated in the first graduating class of Carroll High school in 1959 and still remained friends with many of his classmates.

Not only was he a star athlete, beloved Coach, and trusted Pharmacist, he was also a great Dad, big Brother and true friend and will be missed by many.

To order memorial trees or send flowers to the family in memory of Richard Bruce Matthews II, please visit our flower store.