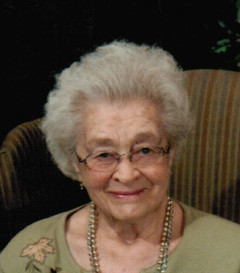 Reva Faris Wilson was born on December 5, 1921 on a farm near Flandreau, South Dakota and died peacefully in her apartment in Portland, Texas on January 12, 2017.  She attended school in a one room school house for grades one through eight and then attended high school at Egan, South Dakota where her father was the band director.  After high school, she attended Dakota State University at Madison, South Dakota where she received a teaching certificate after one year of studies.  After teaching for four years in a one room school house, she joined the Army Nurse Cadet Corp in Memphis, Tennessee.  She graduated from there and received her registered nurses license.She met her husband, Charles in Memphis, Tennessee. They moved to Texas shortly after their marriage. Charles and Reva were married 58 years before his death in 2009.  They loved to travel – after their retirement, they travelled to China, Japan, New Zealand, Switzerland, Alaska, Canada, Africa and the Holy Land.  Two of Reva’s favorite trips were the African safari and the visit to the Holy Land.As an RN, Reva was employed by the Texas Department of Health when they lived in Laredo and San Antonio where she retired at the age of 65.She was preceded in death by her husband Charles Lee Wilson and her twin sister Rachel Vorhees.  She is survived by three sons, Gary (Carol) of San Antonio, Texas, Randy (Sylvia) of Corpus Christi, Texas and Danny (Dee) of Wallace, Texas; six grandchildren and eleven great-grandchildren.The family would like to give special thanks to Andrea Morin who was Reva’s caregiver for the last six years of her life. In lieu of flowers, donations may be made to her church, Oak Ridge Baptist Church, 2100 Buddy Ganem Dr., Portland, Texas 78374 in memory of Reva.Visitation will be held from 1:00 - 3:00 PM, Sunday, January 15, 2017 at the Limbaugh Funeral Home. Funeral services will be held at 1:00 PM, Monday, January 16, 2017 at the Oak Ridge Baptist in Portland. Interment to follow at Palms Memorial Gardens.

To order memorial trees or send flowers to the family in memory of Reva Sophie Wilson, please visit our flower store.
Send a Sympathy Card