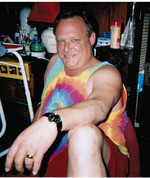 Philip Charles Hill passed away on May 4, 2011 in Corpus Christi, Texas at the age of 49. He was born on July 31, 1961 in McAllen, Texas to Margaret Ware Hill and Robert AF Hill. Philip is a 1979 graduate of Gregory-Portland High School and a member of First Presbyterian Church of Portland. He is preceded in death by his mother Margaret Ware Hill and his brother, Robert Ware Hill. He is survived by his father, Robert AF Hill; daughter, Carrie Johnson and husband Douglas of Huntsville; son, Philip "Randy" Hill and wife Falon of Kerrville; daughter, Jessica Hill of Austin; his grandchildren, Taylor, Bailey, Jax and Paeton; his sister, Margaret and brother-in-law Joe Davidson; nephew, Joe Davidson III and niece, Angelica Davidson.
Funeral services will be held at 10:00 AM, Friday, May 6, 2011 at the Limbaugh Funeral Home. Interment to follow at Palms Memorial Gardens.

To order memorial trees or send flowers to the family in memory of Philip Charles Hill, please visit our flower store.