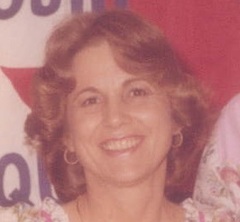 Peggy Mauch took her final rest on June 19, 2016 following a long and courageous battle with Alzheimer's disease.  Peggy was a devoted wife, loving mother and wonderful grandmother and great-grandmother, who with this loss, will be felt deeply by her family and friends.  Peggy is a beloved daughter of our Lord and Savior.

Peggy was born April 4, 1935 in Ranger, Texas, to Raymond and Alta James. Peggy graduated from Gregory-Portland High School in 1953.  Peggy married her high school sweetheart, Ferd Mauch.  Peggy was married to Ferd for sixty-one (61) years until his death in 2014.  Peggy enjoyed country & western dancing, square dancing with her husband and they loved to entertain family and friends at their Goliad Ranch.

Visitation will be held Saturday, June 25, 2016 to begin at 12:00 p.m. with funeral services to follow at 1:00 p.m. at Limbaugh Funeral Home, 500 Wildcat Drive, Portland, TX.  Interment will follow at the Palms Memorial Gardens Cemetery.

In lieu of flowers, please consider a donation to the Alzheimer's Association, 3701 Pender Drive #400, Fairfax, Virginia, 22030 or your favorite charity.

To order memorial trees or send flowers to the family in memory of Peggy L. Mauch, please visit our flower store.
Send a Sympathy Card