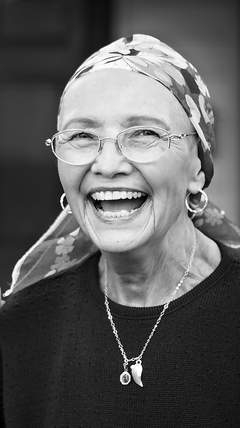 Patricia Ida Strathman McCarty, passed away from pancreatic cancer on Saturday, August 27, 2016 (her 80th birthday). She was lovingly surrounded by her husband and children. She was born August 27, 1936 to Al and Patty Strathman.

Pat graduated from Incarnate Word Academy in Corpus Christi and went on to work at PPG Industries, where she met her husband John. They were married on May 2, 1959. She later worked as a Fashion Two Twenty cosmetic consultant.

Pat loved her Catholic Faith and was devout about saying the rosary every night with her beloved John. She was very proud that they had been married for 57 years and had raised 4 children all involved in the faith. She was a member of the Catholic Daughters of America and the Thursday morning prayer group.

Pat was diagnosed with Stage IV pancreatic cancer on January 15, 2015. She survived for 19 quality months! We have many people to thank for this, her family doctor Darryl Collins, The Christus Spohn Cancer Center, Dr. Shantan Reddy who guided her on this journey with cancer and the Spohn Shoreline A7 nurses and staff. Pat attacked cancer with a SMILE. She never complained and always said “I have been blessed with an amazing life”.

Pat was preceded in death by her parents Al and Patty Strathman, and her brother Len Strathman. She is survived by her husband John McCarty; her loving children Jack (Kaye) McCarty of Lake Elsinore, CA, Diane (Steve) Robeau of Portland, Texas, Cecilia (Keith) Floerke of Taft, Texas, and Nancy McCarty of Portland, Texas; her sister Mary (Don) Zidlicky and brother Dennis (Beth) Strathman. She is also survived by many cousins, nieces and nephews. She LOVED being called Grandma! She was blessed with the following grandchildren, Megan (AJ) Llewellyn, Stephen and Christopher Robeau, Joseph and Mathew Floerke. She was also the proud great grandma to Ryder, Madilyn and baby L.

We ask for prayers especially for our dad as he learns to live without his beloved Patricia.

To order memorial trees or send flowers to the family in memory of Patricia Ida McCarty, please visit our flower store.