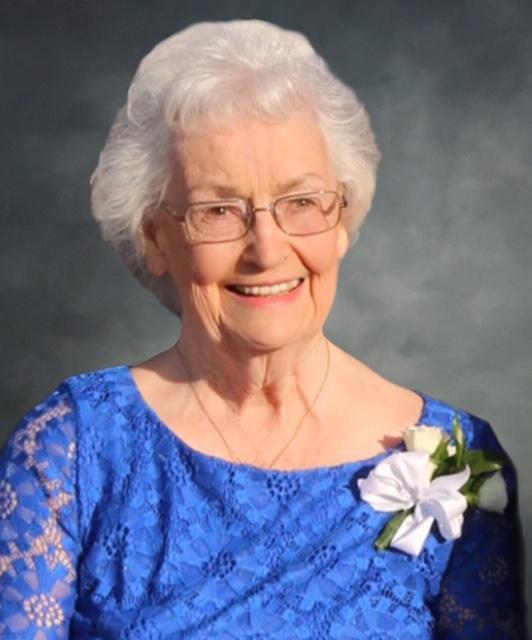 Patricia Ann Fairchild, of Portland Texas, passed away on November 1, 2018.  She was born January 5, 1935 in Port Arthur, Texas to Sidney and Viola Greig.   She attended Port Arthur schools, where she met the love of her life, Patrick Lawrence Fairchild.  She was a member of the band and drill team as well as an honor student.  She very proudly wrote her class song for Thomas Jefferson High School where she graduated in 1953.  She attended and graduated from Port Arthur College Business School and began her administrative career.  On June 5, 1954 she married Patrick and moved to College Station, where Patrick attended Texas A&M University.

They later settled in Nederland and Patricia began her long-time career working for Dupont in Beaumont.  After the family moved to South Texas in 1974, Patricia began work at Dupont in Ingleside, finally retiring early when her eyesight made it too difficult to continue.

After retiring, Patricia devoted her time to her church community at Our Lady of Mt. Carmel.  She joined the St. Vincent de Paul Society, visiting those in need and providing assistance, serving for about 15 years.  She was a member of the Ladies’ Prayer Group and served as a Lector and Eucharistic Minister.   Patricia felt a calling to minister to the sick and needy.  She coordinated the homebound ministry, developing many personal relationships with those she visited every Sunday for prayer and Holy Communion.  Her compassionate heart led her to volunteer, with Patrick by her side and as chauffeur, as a volunteer for Christus Spohn Hospice, sitting with patients in their home and later providing bereavement support.  As a result of their dedication to this ministry as well as St. Vincent de Paul, she and Patrick received a Caller-Times Jefferson Award for service in 2002.  She and Patrick also received an Apostolic Blessing from Pope Benedict XVI in 2008.

Patricia always showed strength and grace, dealing with her blindness and the difficulties that it caused - having to give up her ministries, her driving, cooking and many other things.  She ministered to her friends and family through prayer, calls to check on them when sick, or just by listening.    Her love of her family was unconditional and never-ending.  She wrote humorous poems to her friends and family on special occasions.  Her family Christmas poems to the tune of a carol became an annual tradition.  Her faith in God helped her through the many years of blindness, the loss of her dear Patrick, and the recurrence of her cancer.

Visitation will be at Limbaugh Funeral Home, Portland, on Monday, November 12th, from 4:30 to 6:30 pm  with a service at 6:30 pm.  The funeral mass will be celebrated on Tuesday, November 13th at 10:00 am at Our Lady of Mt. Carmel Church, Portland, with burial following at Palms Memorial Gardens Cemetery, Portland.  Pallbearers are her grandsons Blaine, Ricky, Lucas, and Yale Fairchild; Brandon and Aaron Bridger; and Austin MacLean

The family thanks Mary Havelka, Sandra Yebra, and Misty Whitley (Altus Hospice) for their loving care of Patricia during her illness.  In lieu of flowers, contributions can be made to the Foundation Fighting Blindness or American Cancer Society.

To order memorial trees or send flowers to the family in memory of Patricia Ann Fairchild, please visit our flower store.
Send a Sympathy Card