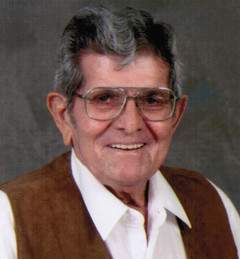 Mickey began his career in the oil and gas industry “roughnecking” at the age of 16. He worked for Wymore Oil Co. for 4 years and retired from Coastal Oil and Gas Corp. as production superintendent after 38 years of service. His career took him to Argentina and Venezuela. He earned a reputation as an expert on production facilities, platforms, pipelines, compressor stations, and off-shore operations.

Mickey and Joyce were transferred from Orange Grove to Hebbronville, Skidmore, Freer, Fulton, and finally to Portland (1966), where they have lived for 50 years. After retiring in 1996, he formed MTD Oilfield Services, engaging in oil and gas consulting.

He was volunteer fire chief in Fulton from 1961 – 1965. He always liked to tell about a motel fire they had. They saved half of the swimming pool.

Mickey and Joyce owned the SHA-LIN Ranch in Live Oak Co. for 39 years. He loved ranching, raising cattle and horses.

Mickey was a charter member of Coastal Credit Union. He was listed in “Who’s Who in the South & Southwest” 1991 – 1992. He lived his life his way, with no regrets. He loved singing country/western songs, especially “Seven Spanish Angels” in Spanish and English. He will be greatly missed.

To order memorial trees or send flowers to the family in memory of Mike T. Davidson, please visit our flower store.