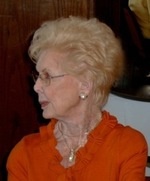 Mary Alma McCann Davis, 86, left her family and friends on January 20, 2012 after fighting numerous courageous battles with her health. She was the daughter of area farmers G.H. and Ola Hunt McCann and granddaughter of M.K. Hunt, one of the first settlers of the area during the late 1800's. Growing up in Gregory, Mary Alma spent a blessed childhood among her numerous aunts and uncles and extended family. It was here where her gracious family friend "Aunt" Alma gave her a doll complete with hand sewn clothes which established a lifetime love of fashion. Mary Alma's early education started in the Gregory school system before it merged with Portland. Under the guidance of first year principal W.C Andrews, her cheerleading squad was directed to come up with a school song. She offered her Camp Waldemar song which is now the current Gregory Portland fight song. Mary Alma attended Baylor as a freshman, where she found a way to incorporate her love of dancing along with her studies. She then transferred to Texas A & I in Kingsville where she met her eventual husband Curtis Robert (Bob) Davis. During WWII, she continued her love of dancing spending memorable nights at the USO, even winning a jitterbug contest. Mary Alma resided in Taft and taught English for many years. She was President of the Jr. Woman's Club, and active in the Woman's club, Tuesday bridge club, two birthday clubs, and the Kiwanis Club. After retirement, she spent her time reading and following the adventures of her four children. Mary Alma overcame many adversities with her health during the last decades of her life proving that she does indeed belong to the "Greatest Generation". Mary Alma was preceded in death by her husband Curtis Robert (Bob) Davis, eldest son Curtis Robert (Curt) Davis II, and sister Maureen Barker. Survivors include a daughter, Carol (Doll) Jolink (Dirk) of Austin, sons Kimsey Davis (Susan) of Portland and Kevin Davis (Amy) of Denver and daughter-in-law Jennifer Knauer Davis of Portland. She also leaves eight grandchildren: Dylan and Duncan Davis, Chaille and Jennifer Jolink, Ainsley and Hadley Davis, Dewitt and Macy Davis, and numerous nieces and nephews. Mary Alma also leaves behind a much larger extended family, the many hundreds of English students she taught at Taft Junior High. Mary Alma was always thrilled to have former students reintroduce themselves years after they had graduated. She remembered every one. Mary Alma will be greatly missed. Memorials may be made to the Taft Library, the Taft Blackland Museum, or a charity of your choice. Graveside services will be conducted at 10:00 AM, Monday January 23, 2012 at the Palms Memorial Gardens in Portland, Texas. A memorial service will be conducted at 11:00 AM Monday January 23, 2012 at the First Baptist Church in Taft, Texas.

To order memorial trees or send flowers to the family in memory of Mary Alma Davis, please visit our flower store.