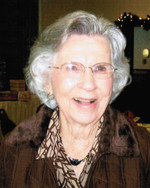 Taft, Texas- Dateline
Marion Elizabeth Crites Duprie Lamprecht went to be with the Lord on June 7, 2012, at the age of 90, in Boerne, Texas. Born June 30, 1921, to Fay and Eda Schmidt Crites, who preceded her in death, Marion had been a long- time resident of Taft, Texas, before recently moving to Boerne.
Marion attended Taft Public Schools and Our Lady of the Lake in San Antonio. She married Dempsey Joseph Duprie in 1943, who preceded her in death in 1982. They were the parents of six children. Her surviving children are: Dempsey James Duprie (Elaine) of La Vernia, Texas., Mary Celeste McCabe (Mike) of Boerne, Texas., Don Xavier Duprie (Debie) of Portland, Texas., and Suzanne Elizabeth Hardeman (Nash) of Boerne, Texas. Marion was preceded in death by two sons: Lawrence Fay Duprie and Paul Noe Duprie.
Marion remarried in 1985 to W. O. "Dutch" Lamprecht, Stockdale, Texas., who survives her. They lived on part of the original Schmidt/Crites farm, purchased in 1891. Marion and Dutch were active members of the Corpus Christi Rose Society for several years and, at one time, had more than 100 species of roses in their yard.
Marion relished her family and community history which led her to be active in family genealogy, serving on the board of directors of the Coastal Bend Genealogical Society for six years, and assisting in the acquisition of a grant for the founding and organization of the Taft Blackland Museum, where she served on the board of directors and as a docent for over ten years. She was the organist for the Holy Family Catholic Church for many years, President of the Refugio Deanery of Catholic Women for three years, and was also an officer and member of the Altar Society. Marion also served as President and in other offices of the Woman's Club of Taft, favoring the Garden Department of that organization.
Marion was recognized for her community service in 1976 with the Taft Kiwanis Citizenship Award and in 1995 she was awarded the Taft Chamber of Commerce Humanitarian Award. In 2005, she received the Taft Blackland Museum Volunteer Appreciation Certificate.
Along with her husband and four children, Marion is survived by her stepson Bill Lamprecht (Sheri) of Stockdale, Texas., and also her grandchildren: Stephanie Duprie Routh (Todd), of Austin, Texas., James W. Duprie (Laura), of Midlothian, Texas., Greg Sutton (Karen), of Sugarland, Texas., Justin Duprie, of Los Angeles, California., Jacey Duprie (Grant), of Los Angeles, California., Katie Cantu (Joe), Jennifer Heymann (John), and David Sien Jr., all of San Antonio, Texas., and step-grandson, John Rogers of Stockdale, Texas. Marion was blessed with thirteen great-grandchildren: Zachary, Allie and Ava Routh, Dempsey, Emily and Calvin Duprie, Trevor, Bobby, Madison and Jameson Sutton, Deavin, Cole and Connor Cantu.
Visitation will be held from 5:00 - 8:00 pm Sunday, June 10, 2012 with a rosary to be recited at 7pm that same evening at the Limbaugh Funeral Home, Portland, Texas. Funeral mass will be celebrated Monday, June 11, at 10am at Holy Family Catholic Church, Taft, Texas, with Father Dennis Zerr officiating. Interment will follow at The Palms Memorial Gardens Cemetery in Portland, Texas.

Memorials may be made to the Taft Blackland Museum or a charity of your choice.

To order memorial trees or send flowers to the family in memory of Marion Elizabeth Lamprecht, please visit our flower store.
Send a Sympathy Card