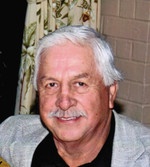 Mario Salas Solis Sr., 71, of Portland, Texas, passed away on June 7, 2013 after a long illness.
He was born in Gregory, Texas on December 12, 1941 and graduated from Gregory High School. Mario married Odilia Ramirez on August 17, 1963 and were married for 49 years.
Mario served in the U.S. Army from 1963 - 1966. He worked as an Aircraft Examiner for the Corpus Christi Army Depot and retired after 34 years of Civil Service. He was a member of the Knights of Columbus, enjoyed golfing, and was a lifelong fan of the GP Wildcats, Dallas Cowboys and the Houston Astros.
He is survived by his wife Odilia, three sons, Mario (Elizabeth) Solis Jr., Rudy (Diana) Solis, and Rafael (Amy) Solis, four sisters, Evangelina Solis, Rosalinda Lozano, Azucena Solis, and Narcedalia Robles; eight grandchildren Alexander, Marcus, Nicholas, Emmanuel ,Leana, Miranda, Conner and Jacqulin; two step-grandchildren and numerous nieces and nephews. He was a loving Husband, Father, Grandfather, Uncle and Brother and will be missed by all who knew him.
Mario is preceded in death by his parents Salvador and Elvira Solis and his brother Arnold Solis.
Visitation will be held Monday, June 10, 2013 from 10:00 - 2:20 pm at the Limbaugh Funeral Home in Portland and from 3:00 - 7:00 pm at Our Lady of Mt. Carmel Church in Portland with a rosary to be recited at 7:00 pm.
A funeral mass will be celebrated at 10:00 am, Tuesday, June 11, 2013 at Our Lady of Mt. Carmel Church.
Interment to follow at the Palms Memorial Gardens.

To order memorial trees or send flowers to the family in memory of Mario Solis, please visit our flower store.