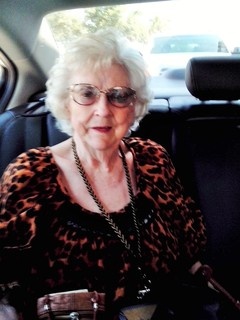 Louise Elizabeth “Judy” Rokovich, 81, passed away July 14, 2017 in Houston, TX.  At her side was her daughter Ann Westcott and her sons Joe Rokovich and Roy Rokovich.  She was the widow of Matt L. Rokovich, Jr.  They shared 60 years of marriage together.

Born in Pawnee, TX on July 22, 1935. She was the daughter of the late Eber Vaughn and Florence Welch of San Antonio, TX.  She was a longtime residence of Portland, TX prior to leaving in 2012.

She was a member of Strong Tower Fellowship Church of Portland, Texas. She was a longtime member and President of The Texas Clown Association. She will be remembered for the charity work done as “Little Hips” the clown and her yearly baking of treats for the Portland Police Department every holiday season.

Visitation will be held from 9am to 12pm on Wednesday July 19, 2017 at Limbaugh Funeral Home. The funeral services will be held on the same day at 1pm, Interment to follow in The Palms Memorial Gardens cemetery in Portland.  Arrangements entrusted to Limbaugh Funeral Home, 500 Wildcat Dr. Portland TX 78374. 361-643-6564. www.limbaughfuneralhome.com

To order memorial trees or send flowers to the family in memory of Louise Elizabeth Rokovich, please visit our flower store.
Send a Sympathy Card