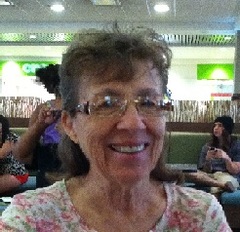 Judith Lillian Whipple, 74, passed away on October 7, 2014 after a long illness.

Judy had many interests, but her love of history led her to tracing genealogy for families and had a genealogical book published. Her passion for history came to life when she worked aboard the USS Lexington Museum, serving from 1992-2013, and was the heart and soul of the Curatorial Department. Starting out as a volunteer shortly after the museum opened, she rapidly became an invaluable member of the Lexington staff. She planned and executed many exhibits visitors experience on the Lexington, such as the Berthing, Chapel, Sick Bay, Captains Quarters, and many other exhibits working tirelessly to create exact replicas. At fundraisers, parades, or special events, Judith became "Rosie the Riveter" to the delight of everyone. Working on the Lexington was not without some ghostly sightings as she told a few hair raising stories, some of which were her own experiences. She also navigated the ship passages and was interviewed for the Ghost Hunters debut.

Judith had a unique ability to relate to former crewmembers, especially those from the WWII generation. Through her ability to earn their trust, she was able to obtain numerous artifacts that greatly enhanced the Museum’s collection. She was also able to get many of the veterans to tell their personal stories which were videotaped for Lexington’s oral history program. Before software programs became available to track donated items, Judith could remember not only where in the archives the item was located, but also who donated the item and where they were from. Whenever former crew members visited Lexington, Judith was the first person they wanted to see.

Judith’s passion for Lexington was unequalled. While she will be sorely missed, her spirit will be forever with us on the Lexington. Visitors will still be able to see her talking about the ship’s history in the film, "Always Ready" which continuously plays in the hangar bay. As we say in the Navy, "Fair winds and following seas," Judith.

The family would like to thank the entire staff of Jesus Mary and Joseph Hospice for their compassionate and loving care. You made her final days peaceful and calm, while providing the family with emotional and caring support.

In lieu of flowers please make a contribution to the USS Lexington Museum or the Alzheimer’s Foundation of America (http://www.alzfdn.org/ContributetoAFA/makeadonation.html).

To order memorial trees or send flowers to the family in memory of Judith Lillian Whipple, please visit our flower store.