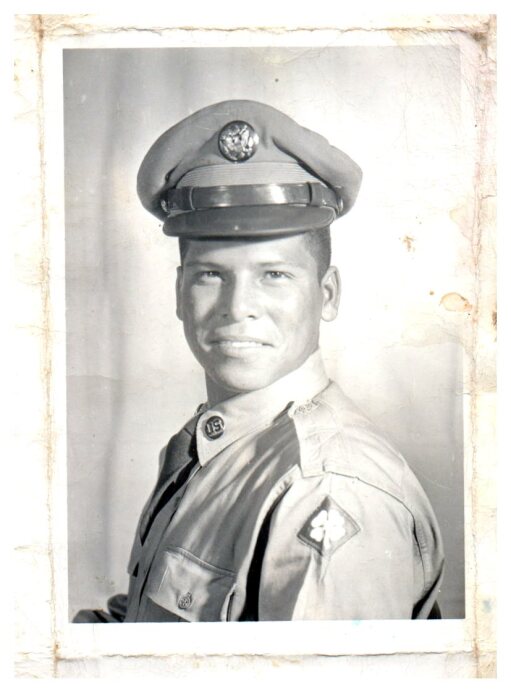 SFC (Ret.) Juan R. Hernandez, 82, husband of Maria Hernandez, passed away 22 September, 2020 at his home.  Born September 26, 1937, in Crystal City and raised in Harlingen, Texas. He was the son of the late Agustin and Ignacia Hernandez.  Juan and Maria celebrated 59 years of marriage in January 2020.

Juan enlisted in the U.S. Army on July 20 1956, where he faithfully and honorably served until he retired on January 31, 1977. During his military career, he served in various military occupational specialties to include; Armor Crewman, Light Weapons Infantryman, First Cook, Assistant Mess Steward, Mess Steward, Food Service Specialist and Dining Facility Supervisor.

Juan was assigned to the following units during his career;

After his military career, Juan retired to Portland, Texas and in 1977, he was selected for a job at the Corpus Christi Army Depot (CCAD) and worked there as a Warehouse Worker (Fork-lift Operator)/Aircraft Engine Repairer for 20 years.  In this new chapter of his life he accumulated long time friendships at CCAD and Portland.  In his spare time, he was an active volunteer at Our Lady of Mount Carmel for the St. Vincent de Paul, commissioned as a Special Minister of the Eucharist from April 1984-April 1987, Life member of VFW 2932, member of the American GI Forum and a member of the Knights of Columbus. He enjoyed spending a significant amount of time with his fellow Vietnam Veteran’s; Joe Trevino, Rudy Ramirez, Tony Ramirez and Eddie Ramirez talking about their experiences in Vietnam.

Please visit the “Life Remembered Story of Juan R. Hernandez” at www.limbaughfuneralhome.com  where tributes and condolences may be left for the family.

“It is foolish and wrong to mourn the men who died. Rather we should thank God such men lived.”

Until we meet again in the clouds of heaven,

To order memorial trees or send flowers to the family in memory of Juan Hernandez, please visit our flower store.