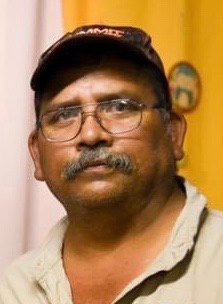 Juan “John” Obregon unexpectedly passed away to be with our Lord on May 21, 2020, at the age of 58. Juan was born to his parents Eustacio and Ramona Obregon on January 12, 1962 in Angleton, Texas. He graduated from Angleton High School, and later married Noemi Salinas Obregon on December 29, 1984 in Gregory Texas, where they raised two sons, Marcos and John Adam.  Juan served time in the army from September 1980 to April 1987. He and his family were devoted members of Immaculate Conception Church in Gregory, TX. He worked the majority of his life in construction as an industrial electrician.

A viewing will be held at Limbaugh Funeral Home in Portland, TX on Monday, May 25th from 1:00 PM - 7:00 PM, with a rosary to follow at 7:00 PM.  A funeral mass will be celebrated at Immaculate Conception Church in Gregory on Tuesday, May 26th at 10:00 PM, with burial to follow at Gregory Cemetery.

To order memorial trees or send flowers to the family in memory of Juan Obregon, please visit our flower store.