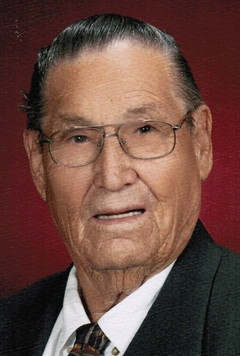 Jose M. Posas (Chemita) passed on September 25, 2016 at home with his family after a long illness with cancer. He was born in Sinton, TX on Sept. 13, 1924 at the Welder Ranch.  He was baptized on April 4, 1925 at St. Bernard Church in Woodsboro, TX.  In 1942, Jose joined the U.S. Navy at 17yrs old and served honorably during WWII until 1945.  While in the Navy, he was a Seabee serving in the Pacific Aleutian Island of Attu, and Okinawa, Japan.  On April 15, 1950, he wed Sara Posas and then raised four children.  He worked for Coastal States Gas Producing Co, which his dept. was later a part of Valero Energy.  Jose led a life of service, most involved once he retired.  He was a devoted, faithful, and active member of many organizations.  He was a Knights of Columbus, 4th Degree, American GI Forum, Cursillo movement for 25 years, Jail Ministry – Nueces Co., Prison Ministry for 18 years in Beeville, TX, and volunteered at the nursing home.  He served as a lector and a Eucharistic minister at Our Lady of Mount Carmel Church, Portland, TX, and maintenance volunteer and helped founded the Guadalupanas at OLMC in 1984.  He loved restoring pickup trucks, antiques, and woodwork.

He is preceded by his father, Senon Posas and his mother Manuela Montalvo, his daughter Teresa Ann Posas, son-in-law Steve Isam,a brother Valdemar Posas, his stepmother, Juanita Posas, a stepsister Mary Posas and a stepbrother, Frank Posas.  He is survived by his wife, Sara M Posas, his daughter Elizabeth Isam (Carrollton, TX), his two sons, David and Mario Posas, and his stepbrother and sisters,  many grandchildren, great-grandchildren, aunts and uncles, cousins and many nieces and nephews.

To order memorial trees or send flowers to the family in memory of Jose M. Posas (Chemita) , please visit our flower store.