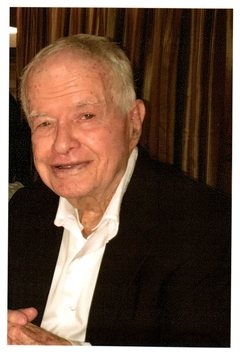 John Raymond McCarty passed away on Monday, March 19, 2018.  He was lovingly surrounded by his children.  He was born on April 12, 1928 to Claude and Emmette McCarty.

John graduated from Corpus Christi High School and attended the University of Houston.  John left the University of Houston to enlist in the Marine Corps.  He then went to work at PPG Industries, where he met his wife Pat.  They were married on May 2, 1959. They both loved to travel and did so extensively in their 57 years together.  John retired from PPG after 36 years of service.

John loved his Catholic Faith and was devout about saying the rosary every night with his wife and after her passing with his children.  He was a man of great integrity and loyalty to God, his family and his country.  John was very proud of his Irish heritage and his service in the Marine Corps.

John had a long battle with heart and kidney disease.   We have many people to thank for his longevity and care: Dr. Darryl Collins, Dr. Ray Graf, Dr. Fariba Zarinetchi and Dr. Patrick Thomas.  John was a faithful participant at Spohn Shoreline Cardiac Rehab.  They were like family to him and he LOVED his time there.  He completed 636 sessions and was very proud of this.  To the Cardiac Rehab Team - THANK YOU for treating our dad extra special.

John was preceded in death by his beloved wife, his parents and his brothers Bob, Pat, Harry and Claude (Junior).

He LOVED being called Granddad! He was blessed with the following grandchildren, Megan (AJ) Llewellyn, Stephen and Christopher Robeau, Joseph (Jennifer) Floerke and Mathew Floerke.  He was also the proud great granddad to Ryder, Madilyn, Sadie and Hadleigh.

The rosary will be recited at 7:00 PM on March 25, 2018 at Limbaugh Funeral Home celebrated by Monsignor Mark Chamberlin. The memorial Mass will be on March 26, 2018 at 2:00 PM at Our Lady of Mount Carmel Catholic Church in Portland.  The mass will be concelebrated by Father  Piotr Koziel and Monsignor Seamus McGowan.

To order memorial trees or send flowers to the family in memory of John Raymond McCarty, please visit our flower store.
Send a Sympathy Card