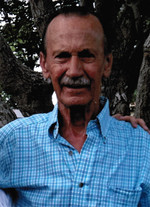 He served as a member of the United States Navy for nine years. After his military service, he was employed at Reynolds Metals as a millwright; retiring after 34 years. Jack was a former member of the Nueces County Sheriff's Posse and South Texas Trail Rider's Association. He was a long-time member of St. Stephen Lutheran Church in Portland.
Jack's happiest moments were spending time with his children, grand children, and great grandchildren. He enjoyed spending time at his land in Papalote raising cattle and enjoying the country life. This brought him much joy and peace.
He was greatly loved and will be dearly missed by his family and friends.
Visitation will take place Friday, April 13, 2012 from 6:00 p.m. - 8:00 p.m. at Limbaugh Funeral Home,
500 Wildcat Drive, Portland, TX.
Funeral Services will be held on Saturday, April 14, 2012 at 10:30 a.m. at St. Stephen Lutheran Church, 619 Lang Road, Portland, TX with interment to follow at Palms Memorial Garden.
The family of Jack Pyatte would like to thank the staff of Angel Bright Hospice for their wonderful care and compassion.

To order memorial trees or send flowers to the family in memory of Jack Conard Pyatte, please visit our flower store.
Send a Sympathy Card