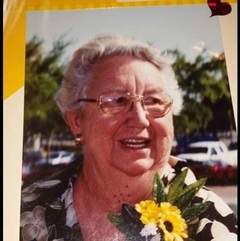 Irma Jean Fort, went home to Our Lord Jesus Christ, February 16, 2016 at the age of 84. She was born January 7, 1932 to John Nick and Ila Jane Clowes in Covington, Tenn. Her parents preceded her in death.

She met Robert D. Fort, who was serving in the US Navy at Millington Naval Base. On July 27, 1949, they eloped and were married in Mississippi. After being discharged from the service, they moved to Port Lavaca, TX. It was there that all five of their children were born. In 1963, they came to Aransas Pass, TX, and have called it home ever since. She was preceded in death by her belove family; husband in 1990; sons James Lee in 1982 & Robert Wayne in 2014; also by her brother John Nick Jr. in 1998 and son-in-law, Richard Foley in 2008.

She enjoyed being Mom, Grandma, Grandma Too, Grandma Ira Jean, Sis, and Aunt Sis to us all. She never met a stranger and her friendships were forever.

"Her children arise up and call her blessed" Proverbs 31:28

We will gather on Saturday, February 27th, at 11:00 a.m. at the Cross Roads Church (formerly First Assembly of God) 417 N. Houston, Aransas Pass, TX, to celebrate her life.

In lieu of flowers, please donate to the CrossRoads Bldg Fund (www.lgso.org) or the Alzheimer's Association (www.alz.org)

To order memorial trees or send flowers to the family in memory of Irma Jean Fort, please visit our flower store.