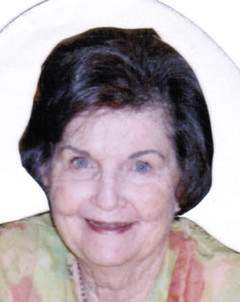 Louise Hancock passed into her Savior Jesus’ arms on December 31, 2015. She left this world to join her husband George who preceded her in death on April 13, 1994. Louise never remarried after George’s death and now extends her love for him into eternity. Louise was the definition of love, hope, friendship and evangelism. These values influenced the many, many people who were fortunate to share her life.

Louise was born October 30, 1931 to Awtrey Alice and O.C. McCurdy in Tulsa, Oklahoma. She graduated from Central High in Tulsa and then married George Hancock Jr. on May 27, 1950. They were married for 44 love filled years.  Louise was a full time mom, homemaker, seamstress, bridge player, golfer, sports enthusiast, fisher lady, and loved friends and socializing.  She was always doing her best to support her friends and family and helping those in need.

Graveside services will be held at 3:00 PM, Monday, January 4, 2016 at Memorial Oaks Cemetery in Houston, Texas.

To order memorial trees or send flowers to the family in memory of Helen Louise Hancock, please visit our flower store.