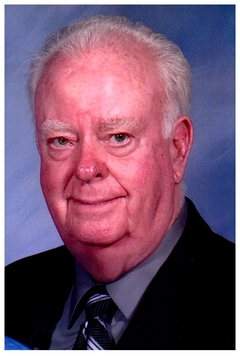 Harvey Lee Baker, 82, passed away peacefully at his home on Thursday July 27, 2017. He is survived by his loving wife of sixty-two years, Iris White Baker, his children; Margaret Hall (David), Wanda Box, and Kenneth Baker. He was also survived by his five grandchildren, his six great- grandchildren, and several nieces and nephews.

Harvey was born on January 5, 1935 in the little town of Fannin, Texas. Soon after his birth, his family moved to Goliad where they lived and worked on a farm and he attended school. While in High School he met his future wife, Iris White, and they were married in the summer of 1955.

Harvey was employed first with South Western Bell and then with ATT. After many successful years of employment with the telephone companies, he retired in 1985. He was a member of the Portland Church of Christ and served as deacon for many years. Harvey enjoyed the outdoors and was an avid camper, so much so that he and Iris traveled to many National State Parks throughout the United States and volunteered as Camp Hosts. The parks system was so impressed with his work, they invited him to work for the park service on a regular basis and for the next seven years he was seasonal forest ranger.

He was preceded in death by his father, Milton Baker, his mother, Mamie Poe Baker, his sisters; Leona Bego, Jackie Parker, and Mildred Lewis, his brothers; John T. Baker and Lewis Baker, his granddaughter, Beverly Hall, and his son-in-law Howard Wayne Box.

A special thank you to the doctors and nurses at MD Anderson Hospital and to Harbor Hospice for their loving care and support.

Visitation will be from 5:30-7:30 PM on Monday, July 31 at Limbaugh Funeral Home. Funeral Services for Harvey will be on at 10 AM on Tuesday August 1 at the Portland Church of Christ. Harvey will be laid to rest at the Glendale Cemetery in Goliad, Texas.

In lieu of flowers, memorial donations may be made to the American Cancer Society or a charity of your choice.

To order memorial trees or send flowers to the family in memory of Harvey Lee Baker, please visit our flower store.