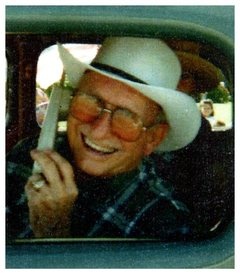 Glen Alvin Butler, 92 of Portland, went to be with our Lord on April 27, 2018. Glen was born January 1, 1926, at Beaver, Kansas to Cora Emma Cutting and Benjamin Van Ness Butler. Following graduation from Seminole High School in Oklahoma in 1944, he joined the Merchant Marines and later served in the United States Army and the Air Force Reserves. His children and grandchildren can recount stories of his time aboard ship traveling between Panama, Japan and the United Kingdom. After completing his military service, Glen married Shirley Margaret Sasser in Edinburg, Texas, on January 30 1949. He attended Texas A&M University, where he and Shirley lived in a 20’ trailer house parked in the shade of Kyle Field. Shirley worked as a switchboard operator while Glen attended classes and worked in the Soil Lab and as secretary in the Student Reprimand Dept. He graduated in 1952 with a Bachelors in Business Administration.

Glen was an ordained deacon and a member of First Baptist Church in of Portland. He was a Master Mason and rose to the Royal Arch Degree. He was a member of Kiwanis International, Gideons International and the Lions Club in Portland. Glen helped start the SWOR Credit union becoming its Managing Treasurer.

Upon retiring from the oil refinery and real estate businesses, Glen and Shirley were members of the Sparkling W. Winnebago Club and WIT, traveling all over the United States and Canada in their motor home. A member of the Corpus Christi Vintage Car Club, Glen also enjoyed restoring classic cars and driving in parades. Glen was a Life Member of Good Sam Club and Family Motor Coach Association. He worked with the Retired Baptist Builders of Texas constructing new churches.

Glen loved the outdoors, teaching his children how to water ski, hunt, fish, and play golf. He was a wonderful husband, father and grandfather who readily participated in the events of his grandchildren’s and great grandchildren’s lives and shared his wisdom along the way. Later in life, some of his most enjoyable moments were spending time with Patsy Armstrong, a wonderfully sweet and funny companion.

A Celebration of Life will be held at Limbaugh Funeral Home, 500 Wildcat Drive, Portland, TX at 2:00 PM on Saturday May 5th followed by interment at the Palms Memorial Gardens. The family will receive visitors Saturday evening at 5:00 PM at Mike Cotton’s BBQ in Portland. Glen’s family would like to thank Cindy and Glenn Dubose as well as Martha Montano for the wonderful care they provided during the last years of his life, in lieu of flowers charity donations in his honor can be made to Texas Baptist Men, 5351 Catron, Dallas, TX 75227

To order memorial trees or send flowers to the family in memory of Glen Alvin Butler, please visit our flower store.
Send a Sympathy Card