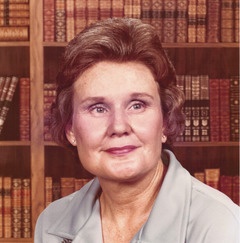 Geraldine Lillian Jackson went to be with The Lord on October 21, 2014.

She was born on March 19, 1927, in Lake Village, Arkansas. Geraldine grew up in Laredo, Texas, where she graduated high school and business school. In 1947, she married Edward Jackson. She accepted Jesus Christ as her Savior at a young age and served Him all of her days. Geraldine was employed in the banking industry for over 30 years. She was an avid reader and lifelong learner. She served her church in many capacities including teaching Sunday school, singing in the choir, and volunteering as treasurer.  Her greatest joy though, was her family. She invested many hours in her children and grandchildren, leaving behind treasured memories with each.

She is preceded in death by her husband, Edward; brother Sam Ward; and son-in-law, Michael McCarley. Geraldine is survived by her daughters, Sally McCarley and Molly Richey; son-in-law, Tommy Richey; six grandchildren and their spouses, and seven great grandchildren.

Funeral services will be held at 1:30 p.m., Friday, October 24, 2014 at the Limbaugh Funeral Home in Portland. Interment to follow at Palms Memorial Gardens.

To order memorial trees or send flowers to the family in memory of Geraldine Lillian Jackson, please visit our flower store.
Send a Sympathy Card