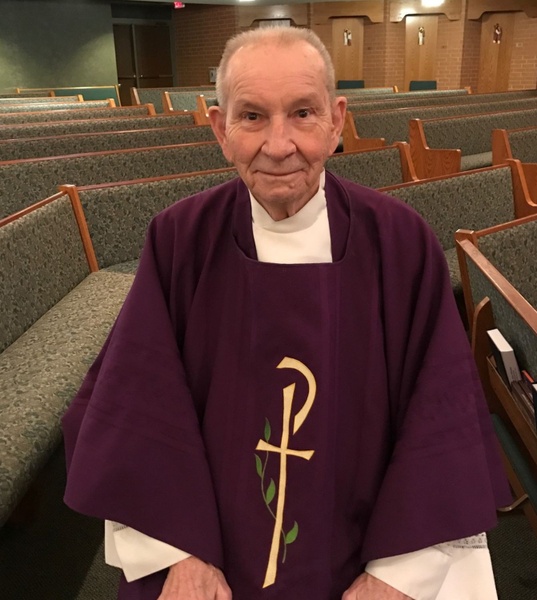 Reverend Jerome Zurovetz, also known as Father Jerry, passed away peacefully after a short illness at his

home on November 24, 2021 in Portland, Texas. He was 83 years old.
Father Jerry, one of 6 children, was born August 25, 1938 in Agua Dulce, Texas to Frank, Sr. and Frances Zurovetz. He attended St. John’s Parochial School in Robstown, graduating in 1956. He attended college at the Corpus Christi Minor Seminary before transferring to Assumption Seminary in San Antonio where he graduated. He was ordained to the priesthood on May 27, 1967 at Corpus Christi Cathedral by Bishop Thomas Drury. For 54 years, he ministered to the people of St. Patrick’s Church and Christ the
King (Corpus Christi), Sacred Heart (Sinton), St. Therese (Woodsboro), St. Theresa (CC), Holy Family (Taft), and, finally, Our Lady of Mt. Carmel (Portland) where he retired after 18 years. During his time at Our Lady of Mt. Carmel, he ministered to the sick and elderly, regularly visiting the nursing home and those infirmed at home. He was very loved, especially by the children, and often would be seen surrounded by them, joking and laughing. He knew all of their names. After retiring, he continued to
administer the sacraments from his home in Portland.
In his earlier years, Father Jerry loved to fish and travel with his priest friends. Later, he could probably be found at the local Dairy Queen on any evening, spending time with his parish friends and visiting with others.
He is preceded in death by his parents; brothers Frank, Jr and Henry Joe; and sisters JoAnn and Janie.
He is survived by one sister, Frances Huey (San Antonio) and numerous nephews and nieces.
Visitation and viewing will begin at 5:00 pm on Thursday, December 2nd at Our Lady of Mount Carmel, Portland, with a Rosary to be recited at 7:00 p.m. The Funeral Mass will be celebrated on Friday, December 3rd at 1:30 p.m. at Our Lady of Mount Carmel. Burial will follow at a later date at Memorial Park Cemetery in Robstown, Texas.
Pallbearers will be Gene Broerman, Ron Limbaugh, Larry Luehring, Joe Malik, Walt Muffoletto, Butch Rowe, Tom Yardley, and Greg Young.

In lieu of flowers, contributions can be made in his memory to your favorite charity or to Priests’Pension Fund at Raymond James, Biggins Wealth Services, 700 Everhart, Suite C-1, Corpus Christi, TX 78411.

To order memorial trees or send flowers to the family in memory of Father Jerry Zurovetz, please visit our flower store.
Send a Sympathy Card