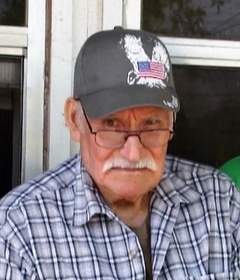 Ezequiel Garcia Rodriguez (El Maestro) passed away with his loving family by his side on June 2, 2017 at the age of 84.  He was born on March 17, 1933 to Ignacio and Guadalupe Rodriguez in Cadreyta-Jimenez, Nuevo Leon, Mexico.  Ezequiel started working at the early age of six where he shined shoes, sold “deuces” and “queso” for the family’s business. He also delivered groceries by bicycle and then became a carpenter’s apprentice.   At the age of twelve, his family moved to Monterrey, Mexico.  As a young teen, he fell in love with his beautiful next-door neighbor and future wife, Rebecca Mendoza Gonzalez.  Their courtship was kept secret for several years where they communicated by tossing notes to each other over the concrete wall that separated their backyard patios, (way before cell phones).   They married on February 15, 1953 and moved to Texas in 1955, to his wife’s original hometown of Gregory.  From this marriage, they had eleven surviving children.  Ezequiel was always a hard worker and jack of all trades.  He first worked at Bauer Dredging Co. digging up the Corpus Christi Ship Channel and all along the Intercoastal Waterway from Brownsville to Louisiana.  In the mid 60’s he returned to his love of woodworking at Hawn Sash and Door Company, then later at Best Wood Inc.  He polished his skill as an expert craftsman making custom cabinets, crown moldings, wooden arches and custom design doors.  He later worked at the Hoffman Co. where he was referred to as the “Maestro” for his vast knowledge and experience at his craft.  He used these skills to train others.  Ezequiel always had immense pride in his craft and would always point out his workmanship to his children.  His works are throughout the area in several high-rise buildings, including the former Corpus Christi Town Club, The Nueces County Courthouse, and many local churches.  His final professional work after being called back from retirement from Hoffman Inc., was installed at the Houstonian where he made the Star shaped wooden railings for their stairwell.  Ezequiel opened a carpentry shop in Gregory where he made many custom wood and specialty design works for people in his surrounding community and local parish.   He could refinish wooden furniture, make new spindles for broken chairs, make custom frames, and cutting boards, and even “palotes” for the tortillas.  He was always willing to help anyone in need, even making time to help strangers that were down on their luck.  He was a true provider for all his children and instilled in them a magnificent work ethic.  His knowledge, wisdom and sense of humor will be sorely missed.  His hard working hands are now at rest.

Ezequiel is preceded in death by his parents Ignacio and Guadalupe Rodriguez, his wife Rebecca Gonzalez Rodriguez and his son, Ignacio ‘Iggy’ Rodriguez.

He is survived by his brother Eduardo Garcia Rodriguez and his sister, Gloria Rodriguez de Garcia from Monterrey, Nuevo Leon Mexico and numerous nieces and nephews.

The family would also like to thank our Dad’s homecare providers throughout the years, Chomyo Garcia, Eva Chapa, Lile Trevino, Gigi Deleon, and especially his most recent provider Frances Jimenez.

Special thanks to Gentiva Hospice of Corpus Christi Texas and their staff for their support and kindness.

A rosary will be recited at 7pm on Wednesday June 7, 2017 at Limbaugh Funeral Home, Portland Texas.  The Funeral Mass will be celebrated at 10:00AM at Immaculate Conception Catholic Church in Gregory Texas. Burial will follow at the Gregory Texas Cemetery.

To order memorial trees or send flowers to the family in memory of Ezequiel Rodriguez, please visit our flower store.