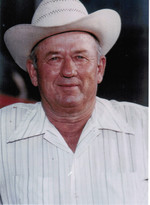 Edwin Manford (Bud) Schmidt passed away on June 28, 2011, at a Corpus Christi Hospital. He was born on June 12, 1919, in Taft, Texas, to Otto Louis Schmidt and Goldie Crites Schmidt. He attended school in Taft and Gregory, Texas, and graduated from Gregory High School on May 30, 1938. While in school, he participated in track, basketball and lettered in varsity football five years; the first of those beginning in the 8th grade. He helped name the "Wildcats" as the football mascot and select red and blue as the school colors.
On December 8, 1941, he enlisted in the Army at Camp Walters, Texas. He served as a Laboratory Technician 4th Class and was stationed in Saipan during World War II. He was discharged on October 6, 1945 at Camp Crowder, Missouri.
He returned to Taft and on July 12, 1947, and married Cecilia Barganski. They shared 64 years of marriage on the family farm where they raised five children. His many hobbies included hunting, fishing, making leather tack and whips, wood-working and gardening.
Bud served on the Board of Directors of Midway Gin in Taft for over 35 years until his retirement. He enjoyed the annual gin barbeques where he contributed in making his famous BBQ sauce.
He was one of the instrumental founders of the San Patricio County Riding and Roping Club established at the Rob and Bessie Welder Park in Sinton, Texas. By his leadership, involvement, and excellent example, his children, grandchildren and great grandchildren have enjoyed participating in many rodeos and events over the years.
He was preceded in death by his parents, Otto Louis and Goldie Schmidt, and his brothers Ernest Schmidt, Maurice (Dorothy) Schmidt, and Gerald Schmidt. He is survived by his wife of 64 years, Cecilia Schmidt, and their children: Charlotte (Monty) Schroeder, Ronald (Debbie) Schmidt, Wesley (Melanie) Schmidt, Melanie (David) Matkin and Darrin (Gigi) Schmidt; grandchildren: Shawna (Scott) DeShazo, Audra (Chris) Rosen, Joshua Schroeder, Stacey (Lee) Decker, Julie Schmidt, Alexis Schmidt, Luke (Kristen) Schmidt, Lance Schmidt, Cody Matkin, Emma Matkin, and Casey Schmidt; great grandchildren: Charlie DeShazo, Cade DeShazo, Jack DeShazo, Tate Tuarany, Anna Decker, and Blaise Decker; sister-in-laws: Lavena Schmidt and Phyllis Schmidt; and many nieces, nephews and life long friends in the Taft area.
Visitation will be Thursday, June 30, 2011, from 6 pm until 8 pm at Limbaugh Funeral Home in Portland, Texas. The funeral service will be held on Friday, July 1, 2011, at 10 am at the Limbaugh Funeral Home with the internment to follow at Palms Memorial Gardens.
Pallbearers: Luke Schmidt, Joshua Schroeder, Lance Schmidt, Cody Matkin, Scott DeShazo, Lee Decker and Paul Schmidt.
Honorary Pallbearers: John W. Hunt Jr., Joe Tumlinson, Bobby Floerke, Willie Floerke, and Roy Floerke.

To order memorial trees or send flowers to the family in memory of Edwin Manford "Bud" Schmidt, please visit our flower store.
Send a Sympathy Card