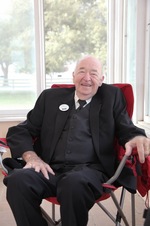 Douglas Dennis Hodge, 81, of Portland, TX passed from this earth on Monday,
December 17, 2012 after a long battle with cancer.

Doug was born on January 9, 1931 in Birmingham, Alabama to John Luther &
Catherine J. (Merrity) Hodge. Doug had a long and established career in the
United States Navy, proudly serving his country. During his 26 year career, he was stationed in many ports of call throughout the United States and abroad. He was recognized numerous times for his distinguished service. Upon retirement from the Navy in 1972, he moved his family to Portland Texas, where he was employed with the Nueces County Sheriff's department until he retired in 1989.
He enjoyed spending time with family and friends.

He was preceded in death by his parents, John Luther and Catherine J. (W) Hodge; 2 brothers and 2 sisters, all of Birmingham Alabama.

Visitation will be held from 6-8pm on Thursday December 20th at Limbaugh Funeral Home in Portland,Texas. Funeral services will be held at 2:00 on Friday, December 21 at Limbaugh Funeral Home. Reverand Rudy Barrera will be officiating. Pallbearers will be David Johnson, Clint Metting, John Davis, Jeffrey Garcia, John Wehman, and Jim Doty.
Doug will be laid to rest at Palms Memorial Gardens.

To order memorial trees or send flowers to the family in memory of Douglas Dennis "Doug" Hodge, please visit our flower store.
Send a Sympathy Card