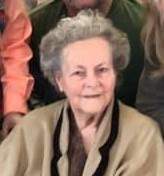 Dorothy Lorraine (Greer) Pierce passed away on October 3, 2019 in Portland, TX, where she had resided since 2017.

Dorothy Pierce was born in Pattison, Texas on August 2, 1931 to Austin Clemons Greer, Sr. and Hilda Lydia Regina (Schroeder) Greer.  She grew up with her beloved paternal grandparents, “Papa and Grandma Greer” out in the country near Pattison, TX.   She graduated salutatorian of her high school class at Royal High School in Pattison, TX.  She, along with her parents and siblings, moved to South Texas during the oil boom of the late 1940s.  It was at the King Ranch Gas Plant, near Kingsville, TX, where she and her family lived, that she met her husband, James D. Pierce, whom she married in 1951.  She converted to Roman Catholicism in 1956, when she was baptized, received first communion, was confirmed and she and Mr. Pierce had their marriage blessed – all in one ceremony at Our Lady of Guadalupe Catholic Church in Hebbronville, TX... while 8 months pregnant with her first child.

Mrs. Pierce and her husband lived at Colorado Humble Camp, between Hebbronville and Guerra, TX.  They then moved to Kelsey-Bass Humble Camp west of Rachal, TX.  Then they made their final move to Falfurrias, TX were they lived all of their married life.  Mrs. Pierce continued to reside in Falfurrias after her husband's death in 1996, for a total of 55 years.

During her lifetime, Mrs. Pierce lovingly raised two children and obtained a Bachelor of Arts in Elementary Education later in life – being just shy of the necessary credits to have earned a Master's Degree in Elementary Education.  She was a teacher in Premont, TX for a short time, but preferred to substitute teach in Falfurrias' schools for many, many years.

Interment will take place at 11:00 AM on Monday, October 7, 2019 at the Pattison Cemetery adjacent to Sacred Heart Catholic Church at 4445 Farm-to-Market Road 359, Pattison, TX.

To order memorial trees or send flowers to the family in memory of Dorothy Lorraine Pierce, please visit our flower store.