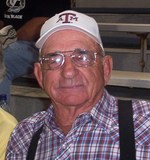 Donnie Dee Medders, 80, went to meet the Lord, on August 18, 2012. He was born in Gladewater, Texas, December 30, 1931. He graduated from Sabine H.S. and attended Kilgore College. He enlisted in the USAF and served during the Korean War. He was a devoted Christian father and husband and attended the Church of Christ for over 40 years where he served as deacon. He worked as a production foreman for Sinclair ARCO Oil Companies. An avid outdoorsman, he was known for his fun loving spirit and savvy storytelling.
He was preceded in death by his parents, William Harvey and Mattie Laura Medders, his brothers William Harvey Jr., and Jerry Medders, and granddaughter, Tabitha Wright. He is survived by his wife of 56 years, Sue Medders, their children, Mischel (Keith) Wright of Rogers, Arkansas, Sharon (Ed) Patterson of Henderson, Texas, Steven (Penny) Medders of Wharton, Texas, and Calvin (Karyn) Medders of Friendswood, Texas; his sisters, Janis (Mike) Lewis of Henderson, Texas and Padgett (Paul) Sheibe of Plano, Texas, and grandchildren, Joshua Wright, David (Rocio) Wright, Lucas Patterson, Lane Patterson, Deanna Medders, Cameron Medders, and Tylea Medders.
Visitation will be held from 5:00 - 7:00 PM, Monday, August 20, 2012 at the Limbaugh Funeral Home in Portland, Texas. Funeral services will be conducted at 10:00 AM, Tuesday, August 21, 2012 at the Church of Christ, 2009 Wildcat Dr., Portland, Texas. Interment to follow at the Palms Memorial Gardens.

To order memorial trees or send flowers to the family in memory of Donnie Dee Medders, please visit our flower store.