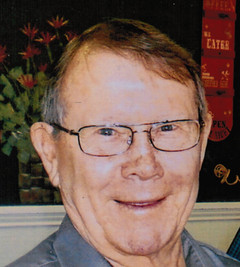 Daniel C. Erck joined his beloved wife, Geneva Faye in Heaven on June 22, 2016.  “Dannie” for those that knew him, was born November 26, 1930 in Seguin, Texas to Daniel Sr. and Louis Cecelia Fortune Erck.  He married Geneva Faye Murphy on November 25, 1950 and joined the U.S. Air Force in 1951.  After serving four years, he was released from active duty and he and Geneva moved from San Antonio to Portland where he began his career working for Kerr McGee (Southwestern Refining Company) where he stayed employed for 35+ years. Dannie and Geneva were married for 47 years and had two daughters; Carol Ann and Janet Sue.  In his younger days, you could find Dannie at the Live Oak Country Club, where he spent many afternoons perfecting his golf game.  Since retiring his clubs, he picked up playing dominos and has since met the guys every afternoon at Dairy Queen for the last 10 years.  Dannie was an active member at the First Baptist Church where he was baptized in 1961 and has been a Portland resident for 62 years!

Dannie is survived by his daughter Janet Erck Spears and husband Bill; grand-daughters Sharla Simmons (Great Grand-daughters Kasey, Kylee, Khloe and Kinsley Forehand), Meghan Spears and Kelly Spears; his sister Melva Erck Thornton and husband Billy; and numerous nephews and nieces whom he was very proud of. Dannie is preceded in death by his wife Geneva Faye (1997) and daughter Carol (1999).

Funeral services will be held at 10:00 a.m.  Monday, June 27, 2016 at the Limbaugh Funeral Home in Portland.  In lieu of flowers, Dannie asked that monetary donations be made to his home congregation at First Baptist Church in Portland, Texas.

To order memorial trees or send flowers to the family in memory of Daniel Charles Erck, Jr., please visit our flower store.
Send a Sympathy Card