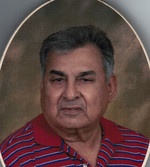 Concepcion Rangel (Concho) born December 8, 1936 in Goliad, Texas, passed away June 4, 2013 at the age of 77.
He was preceded in death by his parents Juan, Aurora & Lupe Rangel; one son David Rangel; sisters Soyla Perez, Teresa Rangel; brothers Domingo and Luz Rangel.
He is survived by his wife Ester Rangel of 52 years; one son Daniel Rangel; one daughter Cynthia Rangel; one granddaughter Brittany Rangel; one grandson Ryan Rangel; brothers Furtunado Rangel, Mario Rangel, Israel Rangel, Enrique Rangel, Ernesto Rangel; sisters Anita Trevino, Juana Rubio, and Elida Garza.
He was a loving, caring husband, father, uncle, brother and friend, who will be missed dearly but treasured in our hearts. He was also a devoted member of the Immaculate Conception Catholic Church in Gregory, Texas.
Visitation will be held from 3:00 - 9:00 pm, Thursday, June 6, 2013 at the Limbaugh Funeral Home with a rosary to be recited at 7:00 pm that same evening.
A funeral mass will be celebrated at 10:00 am, Friday, June 7, 2013 at the Immaculate Conception Catholic Church in Gregory. Burial to follow at Palms Memorial Gardens in Portland, Texas.

To order memorial trees or send flowers to the family in memory of Concepcion Rangel, please visit our flower store.