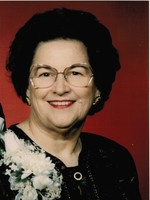 Colleen Dee Werland Ahlers, age 77, passed away on June 7, 2013. She was born on her grandfather's farm near Taft, Texas January 13, 1936 to Kermit (Slim) and Lillian Werland.
Colleen graduated from Gregory Portland High school, class of 1954. She was class Salutatorian, Lantana Duchess, class secretary-treasurer, cheerleader, editor; she played volleyball and basketball and was basketball captain. After high school she went to Durhams Business College.
She met her husband of 58 years, John Ahlers, on a blind date April 30. 1954. It was a double date and they went to the Buccaneer Carnival, then to the Weber root beer stand. This was the beginning.
They married that same year on November 6, 1954 in Taft, Texas at Holy Family Catholic Church by Father Joe Alvarado. That first year they farmed with Colleen's father. Colleen could have gotten a job using her business skills, but choose not to. She wanted to be a stay at home mom; she wanted to be with her children. How lucky they were. Family was everything to Colleen.
Colleen and family attended and were very active at Our Lady of Mt. Carmel Catholic Church in Portland, Texas. Colleen was a very strong Christian role model. They went to every school function, Colleen went to Cub Scout meetings and yelled at little league games.
Then came high school and sports. She never missed a game, the same went for the grandchildren.
They went on family vacations on the Frio River. Colleen was a good cook; cooking her casseroles and that special buttermilk pie. Her dishes were popular at holiday dinners - Christmas was her special time of the year with the grandchildren. Putting up the manger scene and decorating the tree. The grandkids all helped. Many had decorations they made on the tree.
Colleen and John had big celebrations at their 25th, 40th and 50th wedding anniversaries, and in a year and a half would have been their 60th. Together they waltzed across Texas many times. They will waltz together again.
God blessed this family with Colleen, wife, mother, daughter, sister and friend. Colleen and John had four children Jolene, John Jr., Jassen, and Jerald.
Colleen was preceded in death by her parents and daughter Jolene Ahlers, who died in infancy.
Colleen is survived by husband John Ahlers of 58 years; sons John Jr. (Tammy), Jassen (Kim), Jerald (Pat); grandchildren John III (Loribeth), Valerie (Steven), Matthew, Aaron, Steven, Austin, Kayla, Alyssa, and Makenzie; great-grandchildren Lorelia, Landric, Lilah and Ben; sisters Ester Williams, Josephene Ganem and Lee Ola (Barry) Albrecht.
A special thanks to Century Hospice for the care they gave to Colleen. In lieu of flowers memorial contributions may be made to Our Lady of Mt. Carmel Catholic Church.
Visitation will be held from 2:00 - 8:00pm Sunday, June 9, 2013 with the rosary to be recited at 7:00pm that same evening at the Limbaugh Funeral Home in Portland. A funeral mass will be celebrated at 10:00 am, Monday, June 10, 2013 at Our Lady of Mt. Carmel Catholic Church in Portland. Interment to follow at the Palms Memorial Gardens.

To order memorial trees or send flowers to the family in memory of Colleen Dee Ahlers, please visit our flower store.