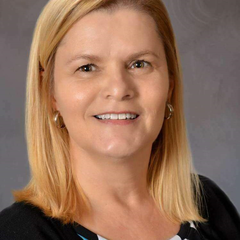 Cherie G. Smith Moore  of Portland, Texas,  passed from this life on March 26, 2017, after a brief but brave fight with pancreatic cancer.  Cherie was born August 22, 1959, in Sparta, Wisconsin, to parents, Wm. A. and Sharon Dixon Smith.  She was one of three children born to Bill and Sharon and because of a military transfer, Cherie became our little Yankee born into a very southern family.    She was a little bundle of love and strength from the very beginning.

Cherie is survived by her sons, Jason Moore (Sarah), Ryan Moore (Jessica) of Corpus Christi, Texas, and Jeremy Moore of Portland, Texas and her step-daughter, Sunny Moore.  Surviving her are parents, Wm. A. Smith (Paula), Clinton, Iowa and Sharon Cox of Aransas Pass, TX, her precious grandchildren, Jason (J. J.) Moore, Jr. and Lily Moore, brothers William A. Smith (Kim) of Portland, Tx., and John A. Mann III (Luanna) of Rockport, TX., sisters Dana G. Cravy (Dale)  of Aransas Pass, TX., Shanna Shutte and Pam Whitehead (Mel) of  Iowa.     She is survived by many loving nieces and nephews and dear friends.  She is also survived by her former husband and father of her children, Sidney W. Moore.   Predeceased by paternal grandparents, Jacob A. and Mildred Smith of Pawhuska, Oklahoma, maternal grandparents, Erbie Dixon of Pawhuska and Della Dixon Leland of Aransas Pass, TX., and her step-father, Felix G. Cox.

Cherie graduated from Aransas Pass High School in 1977 and in 1996 earned an Associate Degree of Applied Science in the field of Medical Lab Technology from Del Mar College, Corpus Christi, TX., and worked in that field for many years. She later received a realtor’s license and worked with Associated Brokers Group and was currently working as a realtor with Coldwell Banker Pacesetter Steel in Portland, Texas. She was awarded “Realtor of the Year for 2016” which was presented to her son, Jason, on her behalf.   She was a past board member of San Patricio County Association of Realtors.  She served as Sec-Treasurer in 2015 and Vice President in 2016.  We are thankful to Coldwell Banker Pacesetter Steel for their fundraising efforts for Cherie and for their friendship.

Cherie was part of a large family who will always remember her love, courage, strength and hard work.  We have so many memories of family gatherings where she enjoyed camp outs with the kids, horseback riding or just hanging out with all of the kids and nieces and nephews.     She was very proud of her sons and they miss her deeply.  She raised them to be fine young gentlemen. She was still mentoring them until the end when they took over and returned their Mother’s care in her last days.   A day spent with her grandchildren, J. J. and Lily, filled her with joy. She especially loved outings with her friend and co-grandma to J. J. and Lily, Jeanie Hope.   It was a great sadness that she would not see them grown. She was proud that both children had won the “Mutton Bustin” Contest in the Rodeo.    Although we grieve her loss and the time we won’t spend with her in this life, we rest assured that we will be with her again.    She had a deep and abiding faith in her Lord, Jesus Christ, and her faith never diminished. She knew she would be healed in Heaven.

Special thanks to her friend, Peggy Benavidez, who was with us all the way, driving her to doctor visits, helping with her care and just loving us.   Thanks also to Oak Ridge Baptist Church for helping in so many ways.

To order memorial trees or send flowers to the family in memory of Cherie Gaye Moore, please visit our flower store.