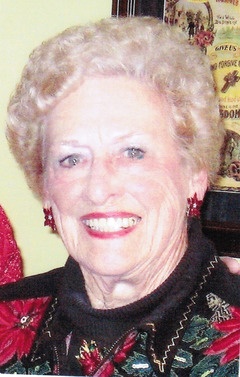 Charlotte Olive Enderle Pratt, age 92, died January 19, 2015 in Portland, Texas. Born April 30, 1922 in San Antonio, Texas to Jessie Avey Enderle and Thomas Lee Enderle. She graduated from Brankenridge High School in 1940. She married John Robert Pratt on January 2, 1945 in Travis Park Methodist Church, San Antonio and enjoyed a loving marriage for 27 years until his death in 1972. John could not be replaced, Charlotte never remarried. John was a Captain in the Corp. of Engineers, U.S. Army after World War II, John and Charlotte settled in Houston, Texas. They belonged to the First United Methodist Church in downtown Houston – Charlotte belonged for 50 years and was on the Administrative Board. She and John were members of the beloved Adelphi Sunday School Class at First Church. She volunteered at Houston’s Methodist Hospital for 5 years and was a member of United Methodist Women. Charlotte retired from Houston I.S.D. as Administrative Assistant to the Superintendent of Instructional Media. Charlotte was a member of Beta Sigma Phi International Sorority for 50 years and was inducted to the Golden Circle, and Order of the Rose in the Organization. She was a member of Delta Master Chapter of Houston and Preceptor Kappa Gamma in Portland, Texas. Charlotte was a member of Houston Area Retired Teachers Association. In 1996 Charlotte moved to Portland, Texas where she became a member of Portland Methodist Church and Cups and Saucers Sunday School Class. In Portland, Charlotte also belonged to the Chat Work Civic Club and Portland Garden Club. Charlotte was preceded in death by her dear husband and two brothers, Thomas Lee Enderle, and Buford Butler Enderle and sister-in-law Letha Isabell James Enderle. Charlotte leaves a daughter, Patricia Ann Pratt Terry and husband Michael of Portland; son John Thomas Pratt and Pam Piazzo of Houston; her beloved granddaughters Jessica Lee Terry, Kathleen Ann Terry Munoz, Erin Marie Terry Croy, and Kelley Caitlen Terry. She leaves a great-granddaughter Caitlyn Ann Munoz. She is also survived by her dear sister- in-law Shirley Enderle and special nieces Christie Lee Enderle Lord, Beverly Kay Enderle Holcomb, Jerri Laverne Enderle Pippert and Marilyn Joyce Enderle Williams. Charlotte loved her family and her church. She loved her friends and loved to laugh and enjoyed life to the hilt. We will cherish her memory and legacy. She will be missed every day.

To order memorial trees or send flowers to the family in memory of Charlotte Olive Pratt, please visit our flower store.