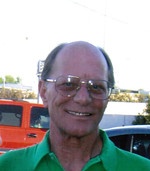 Chuck Olson passed away Thursday, September 12, 2013. He was born in Corpus Christi on October 10, 1953. He is survived by his beloved daughter Heather Seifert Olson, a member of the U.S. Air Force stationed in Cheyenne, Wyoming. His happily anticipated trip to visit her was to take place less than a week from the day of his death.
Chuck is survived by his mother Annette (Tina) Olson and his brother Donald Gunnard Olson of Corpus Christi.
Chuck will be remembered for his loyalty and generous nature, always ready to help when needed. His sweet gentle humor will be sorely missed. Chuck loved writing and reciting his original poetry and going to poetry slams.
Chuck is preceded in death by his beloved sister Jeri Wilhelmina Seeley-Schudde. Jeri's daughter Teresa Nguyen and her family reside in Ohio, and her son Robert D. Hardin and his family live in New Jersey and Texas. Chuck was close to his dad, Donald Leo Olson, also deceased.
Chuck enjoyed his cousins Becky Stewart, Billy Van Leeuwen, David Van Leeuwen and Terry Cross. They are the children of his uncle, Charles Van Leeuwen, retired Army Major, buried in Prairie View Cemetery, as is his grandmother Davine Neumer.
Don and Chuck grew up together in Portland, leading active lives. They especially enjoyed working on pleasure boats in Aransas and enjoying swimming, surfing, etc. and riding their motorcycles. Don has a daughter Reta Brown and a son Donald Gunnar Olson.
The last work Chuck did before retiring with disability, was in demolition. He owned and operated Shamrock Demolition. Before that he worked for Century Geophysical and traveled many places in the states and Canada. Also various places overseas, including Columbia and Turkey.
Visitation will be held from 2:00 - 3:00 pm Sunday, September 15, 2013 at the Limbaugh Funeral Home in Portland. Funeral services will be held at 10:00am Monday, September 16, 2013 at the Limbaugh Funeral Home with burial to follow at the Palms Memorial Gardens.

To order memorial trees or send flowers to the family in memory of Charles Leo "Chuck" Olson, please visit our flower store.
Send a Sympathy Card