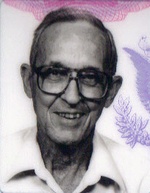 Bernie Duncan Jr., 86, long-time resident of Portland, TX, passed away in his home in Tylertown, MS on December 10, 2011. After growing up in Puxico, MO, Bernie served in the U.S. Navy as an officer during World War II, & graduated from Rice University with his bachelor's degree in mechanical engineering in 1949. As a Boy Scout leader & Sunday school teacher at First United Methodist Church in Portland, he was a mentor to many.
Bernie Duncan spent much of his professional life working for Corn Products Corporation in Corpus Christi, TX. He later founded ARM Refining Company in South Texas, & worked throughout North
America for Indtech & BHP Engineering, as well as many other consulting firms. Bernie also helped his wife realize her dream of opening a bookstore, Books, Inc. in Portland.
Most importantly, Bernie was a loving father, grandfather, & great-grandfather who touched the lives of all those around him. He will be dearly missed.
Bernie was preceded in death by his parents, Bernie & Lora Duncan, wife Verniece, & son Richard. He is survived by son Kirk (Terri) Duncan, grandchildren: Terri (Daniel) Boone & Melissa Staffa, & Danielle, Austin, & Davis Duncan, great-grandchildren: Caty, Ashley, & Cassandra Boone, & Ashton Staffa.
Visitation will be from 5:00 - 8:00 PM, Wednesday, December 14, 2011 at the Limbaugh Funeral Home. Funeral services will be conducted at 10:00 AM, Thursday, December 15, 2011 at the Limbaugh Funeral Home in Portland, TX. Interment to follow at Palms Memorial Gardens.

To order memorial trees or send flowers to the family in memory of Bernie Duncan, please visit our flower store.