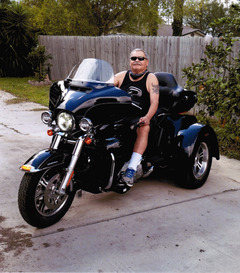 Alfredo Ramirez of Gregory, Texas passed away May 28, 2015 at Lexington Nursing Home in Aransas Pass, Texas after a long illness. Alfredo was born in Corpus Christi, Texas on December 10, 1959, and was a longtime resident of Gregory. Alfredo was a longtime member of La Primera Iglesia Bautista. He loved riding his Harley Davidson motorcycle. Alfredo was a loving and caring son, brother, uncle and friend who will be dearly missed. Alfredo was preceded in death by his brothers Joe and Richard; and father Rogelio Ramirez. Alfredo is survived by his mother Santos; sisters Linda Ramirez, Amanda Ramirez, and Sara (Rey) Barrera; nieces Michelle and Miranda Barrera, Trinity, Taylor and Allie Abrego; and nephew Richi Barrera. He will be missed by all family, relatives and friends, especially his closest friends Pablo Martinez and David Chapa. Alfredo considered Pablo and David very good friends, almost like a brothers. The family would like to thank Pablo and David for all the kindness and consideration for all Alfredo’s special needs.

To order memorial trees or send flowers to the family in memory of Alfredo H. Ramirez, please visit our flower store.