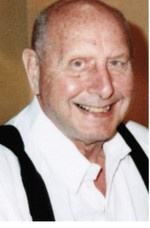 Alfred G. Loidl, retired from Tractor Supply Company, died quietly in his home June 11, 2011. He had been under hospice care for the last 6 months. Born in Ft. Wayne, Indiana, Mr. Loidl spent his youth in Philadelphia, PA. He moved to Anderson, Indiana in 1935, and was a 1939, graduate of Anderson High School where he was named all-state two consecutive years. Upon graduation, he was recruited by Duke University where he was a member of the Rose Bowl team, the only Rose Bowl team not to play at Pasadena, due to WW II. He returned to Anderson where he farmed with his father. In 1959, he married Mary Lou Frank and they operated Loidl Ace Hardware in Winchester, IN from 1960 to 1970. Having liquidated their business in 1970, Alfred became manager of the Maze Ace Hardware in Warsaw, IN from 1970 to 1982. Alfred moved to Texas where he opened an Ace Hardware Store for Lori & Betty Svadlenak. In 1984, Mr. Loidl took a position with Tractor Supply Company in Corpus Christi, TX until his retirement in 2002. He was a member of Our Lady of Mt. Carmel Catholic Church in Portland, TX.
Survivors include his wife, Mary Lou of Portland, TX, daughter, Jennifer of Chicago, niece Candice and her husband, Eugene McNany and their children, Erin & Cara all of Colorado Springs, CO, niece, Shelia Schrenker and her daughter Shirley both of Fresno, CA, sister-in-law, Joan Frank and a nephew, Todd Frank of Vacaville, CA. Alfred was preceded in death by his father Joseph Loidl and mother Sidonie Loidl, and his sister Marianne Armington, two brothers-in-law, Judge James E. Frank and Colonel John R. Frank, and nephews, Bruce and Bradley Frank.
Visitation with the family will be from 5:00 P.M. to 6:00 P.M., Wednesday, July 20, 2011 at Our Lady of Mt. Carmel Catholic Church in Portland, Texas with a memorial mass to be celebrated at 6:00 P.M., that same evening. Burial will be in the IOOF in Frankton, IN.

To order memorial trees or send flowers to the family in memory of Alfred G. Loidl, please visit our flower store.