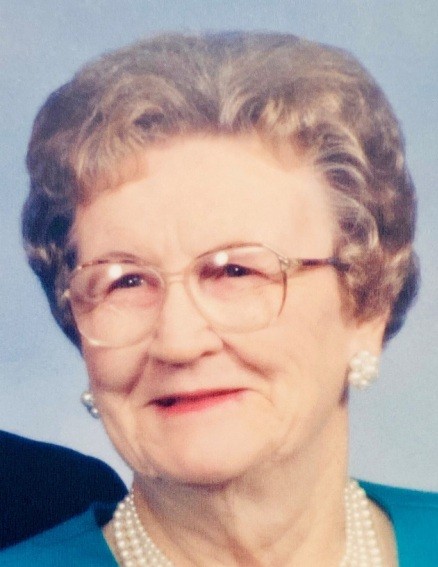 Marian Theckla Balzen Trees was born on April 11, 1921 in a farm house three miles east of Knippa, Uvalde County, Texas to Robert and Amalia (Cook) Balzen.  Marian attended Knippa High School and graduated in 1939.  After finishing Alamo College of Cosmetology in San Antonio, she worked in Uvalde where she met David Trees of LaPryor, Texas.  Marian and David were married on June 28, 1941.

One June 18, 1942 they welcomed their first child, Robert David. On November 24, 1943, they were blessed with their second son, Douglas Wayne, and soon after with their only daughter, Mary Kathryn, on June 6, 1945 to complete their family.

Marian and David made their home in Knippa where she worked as a beautician, sometimes even out of her home, to help support her family.  In 1957, David started a new career with Reynolds Metal Company and the family followed him to Taft, Texas.  After the move, Marian continued to help support her family as a homemaker.  They joined the congregation of Faith Lutheran Church where they attended regularly.

In January 1970, she became “Granny” with the birth of her first grandchild.

In 1980, they moved to neighboring Portland where they resided on St. Charles Street.  At that time, they moved their membership to St. Stephens Lutheran Church where they served faithfully.  Upon David’s retirement, they bought three acres of land just outside of Portland where they built their dream home.  For several years they enjoyed raising barbado sheep, steers, and chickens along with a very robust and productive vegetable garden.  During this time they enjoyed traveling and camping with family and friends.

Throughout Marian’s life, her sewing and seamstress skills were evident in the clothes she made for her children, grandchildren, and great-grandchildren and in the exquisite and beautiful quilts she made for her family.  Marian used her talents in crocheting to support her church ministry by supplying hundreds of wool hats to the U.S. Soldiers serving overseas.

Marian’s kitchen was definitely the heart of her home where she made delicious breads, sweets, and canned the fruits of her beloved vegetable garden.  She also mads jams and jellies for all to enjoy.  A favorite among the grandchildren were her dill pickles and pickled beets.  Granny’s delicious homemade cinnamon rolls were always looked forward to at celebrations and birthdays.

Following the death of her husband in 1997, Marian led a very independent life.  She enjoyed playing games with family, having her hair done by Mary Alice every Friday, and she kept a valid driver license up until her passing.

Easter weekend was always a very special family time for Granny.  She enjoyed watching her large and extended family hunt for confetti eggs and cracking them over each other’s heads, including hers.  Afterwards, the family would enjoy a large lunch and afternoon of fellowship and games.

At her home on Good Friday, April 2, 2021, Marian passed away peacefully into the arms of her Lord and Savior.  She was 99 years old, just nine days shy of her 100th birthday.

She is preceded in death by her parents, Robert and Amalia Balzen; her husband, David Trees; her son, Robert Trees; her great-granddaughter, Kelsey Trees; and her sister, Gertrude Meyer.  She is survived by her son, Douglas (Judy) Trees of Portland, Texas; her daughter, Kathy Rosson, of Portland, Texas; her daughter-in-law, Billie Jo Trees, of Corpus Christi, Texas; six grandchildren; 13 great-grandchildren; and several nieces and nephews.

To order memorial trees or send flowers to the family in memory of Marian Trees, please visit our flower store.
Send a Sympathy Card